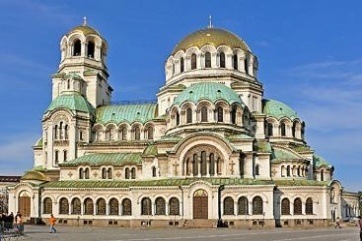 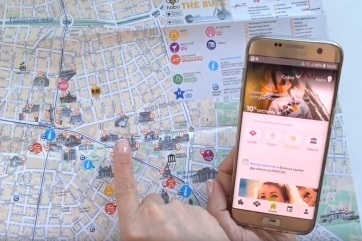 This is a physical paper map of the capital city that provides information about the location of popular tourist sites in Sofia - the capital city. It helps you find the museums, historical monuments, cultural and natural heritage sites that will tell you about the history and culture of Sofia and help you get to know the city.

The interactive travel map of Sofia has much more to offer – it works together with the mobile appilication and can help you find places and tourist objects that will add more flavour to your city tour and make you feel its atmosphere and fully enjoy your tour. 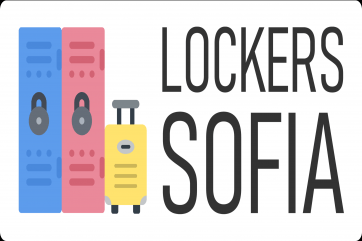 Bulgarian capital and biggest city – Sofia – is by all means, a place that worth it to be seen. Sofia sightseeing is a must, if you want to collect pleasant memories from our country, as well as in case you want to experience its customs. Meanwhile, as the core of Bulgaria’s lifestyle, history and culture, Sofia is the city that can let you dive in the regional atmosphere in the best and most remarkable way.

In this ultimate guide to Sofia sightseeing you can find all the tips and tricks a tourist, who has never been to Bulgaria or even to the Balkans, needs. Hence, in addition to these, don’t forget to take under considerations each of our audio guides as these devices can be great assistance for your individual or group Sofia sightseeing, too. Now, let’s move to our virtual tour around Bulgaria’s capital…

How to Start Our Fantastic Sofia Sightseeing Tour?

Every beginning is hard, but finding Sofia isn’t. As a matter of fact 80% of the flights with Bulgaria as a final destination lands here in Sofia. The airport is close to the hot spots of any standard Sofia sightseeing program, which is why you are not going to be delayed or bored with any additional transportation experiences either on a train, or an interurban bus. On the airport, you can buy a map if you are not going to be helped with an audio guide device, a human guide or simply if you want to make a trip around the Bulgarian capital’s top attractions via the old-fashioned way. In all cases, we need to tell you in advance that Sofia is a truly tourist-friendly city and even if you get lost here, it will take a couple of minutes to meet a stranger who’s going to show you the right way and give directions for your next Sofia sightseeing stop.

Which The Top Attractions That Should Be Included in Our Sofia Sightseeing Are?

Like every other interesting and charming tourist destination out there, Sofia has its big list of top attractions that shouldn’t be missed. No matter how much time you have in the city, these landmarks and interesting things to see are a must. Below, we will provide you a detailed list with some basic information about the top Sofia sightseeing attractions you should definitely visit, make a selfie at, maybe get a souvenir from, and last, but not least, keep in your heart as the best sublime memories from Bulgaria:

1. Alexander Nevsky Cathedral
Alexander Nevsky Cathedral is one of the most emblematic religious buildings on the Balkans. Built in the beginning of the 20th century it impresses with its gold dome, impresses with its authentic and lovely Neo Byzantine style. The style, by the way, is generally a typical architecture composition we find in almost all Russian churches and the similarity isn’t by chance. The cathedral is made in memory of the 200,000 Russian, Ukrainian, Belorussian and Bulgarian soldiers, who died in the Russo-Turkish War in the end of 19th century.

2. Sveta Sofia Church
If you are truly keen on visiting spectacular religious buildings, Sveta Sofia Church should be on your to-do-list, too. This is one of the oldest churches in Bulgaria’s capital, but also a mysterious and spooky home of nearly 60 tombs, ancient remains of 4 other churches that had been burnt during the Turkish slavery, as well as a whole spectacular necropolis.

3. Archaeological Museum
Diversify your Sofia sightseeing experience with a place that has more than just religion and history, but a whole treasure of Thracian, Roman and medieval artefacts. The Archaeological Museum in Sofia shows you the rich Bulgarian history and culture at short range by highlighting your tour with remains even from 4th century BC.

4. National Gallery for Foreign Art
We add this place to your Sofia Sightseeing plan for many reasons. It isn’t just a unique of its kind gallery for the entire Balkan region or an architectural masterpiece. It is also an attraction that debunks the common myth that Bulgaria is still an isolated ex-soviet country with no cultural life. Just visit this place and you will get what we mean.

5. National Palace of Culture (NDK)
NDK is Bulgaria’s symbol of cultural, media, business, political and even social life. Being used for many public and private purposes, the place is also where locals love appointing their meetings after works and in the weekends. Sit around the palace fountains to hold up time while observing Sofia’s youth and social life from a short distance. By the way, if you need some harder relaxation time from your Sofia sightseeing tour, the entire district around NDK offers plenty of wonderful ideas for tasting the most delicious Bulgarian cuisine specialties.

6. Sofia City Garden
Here’s another place you can have a break, lunch or a couple of minutes for relaxation, but surrounded by an awesome and charming retro environment. Sofia City Garden welcomes you with peaceful atmosphere snuggled around a lovely fountain, kid’s swings and beautiful greenery. Borisova gradina (Boris’ garden) is not a bad choice for the same purpose, too, by the way!

Sofia Sightseeing – Our Picks For Not That Standard Attractions to See
Below, you can count on our own choice for an extra ordinary Sofia sightseeing plan, where we include attractions that shouldn’t be underestimated, either:

1. Sofia Zoo
That would be a lovely place to visit in case your tour includes kids. The zoo is a bit far away from the city centre, but who said one tourist destination’s attractions out of the way are not attractive? Except for the friendly lions, elephants, birds, bears and even tigers, you will find lovely playgrounds for some outdoor activity!

2. Drinking Fountains
This emblematic place for all citizens in Sofia welcomes you with healthy mineral water you can drink for free, while just around the corner there’s also a mosque. Don’t get upset when watching people filling their plastic bottles with water. There are no water supply restrictions in the country; it’s just the taste of water that brings people here!

3. Lion’s Bridge
This landmark monument was built during the last years of 19th century to cross the Vladaya River and to make an imaginary boarder between the northern part of the city and its central side. Well, here’s where the selfie is a must, by the way!

4. Pancharevo Lake
If you are up to some walk a long way off during your Sofia sightseeing tour, don’t miss to visit Sofia’s lake – Pancharevo – where local nature shows its charm at a full value!

I don't accept I accept